Thomas Nearney, a first-year Law student at St Mary’s College, has made political history by becoming the youngest ever member elected to Durham County Council. 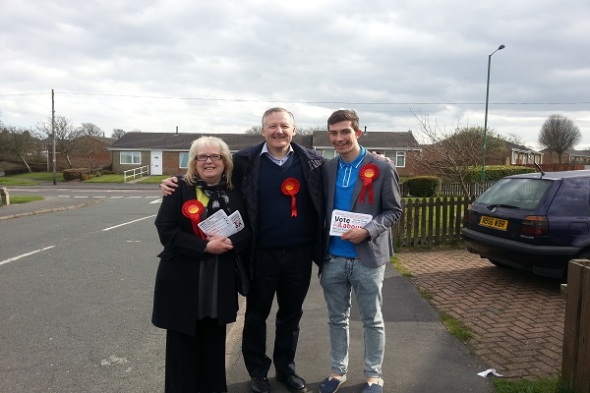 Mr Nearney, who was elected by the narrow margin of 42 votes as a Labour councillor for Annfield Plain, said that he was ‘ecstatic’ about the result.

‘Councillor Michele Hodgson and I were fighting a seat which was half Labour, half Derwentside Independent, so it was not a safe Labour seat as some might think,’ he said.

He attributed their electoral success to a strong campaign on the right messages.

‘We fought a long campaign on local issues, where we listened and acted upon people’s concerns. Our campaign was very positive, which I think helped provide solid foundations on which to build.

‘We set priorities around the quality of the local environment, housing and community engagement; and that is what we will now be acting upon in power.

‘Also, our priorities were deliberately realistic in times where Durham County Council faces budget cuts of £200 million. However, the public saw how effective the Labour team was in the area, and how closely Michele and I work together on local issues, which bodes very well for the future.’

Councillor Nearney joined the Labour Party four years ago when he was a student at St Bede’s School in Lanchester. Since coming to Durham he’s been balancing his degree with election campaigning and a part-time job, a heavy workload that he says will prepare him for the role of councillor.

‘By losing my part time job I will able to concentrate my efforts in Annfield Plain, especially as I will be living at home in my second year.

‘My aim is to be accessible as a Councillor and a Law degree helps facilitate that as it is incredibly flexible, with few lectures and lots of reading.’

He said that he would work hard for local residents and listen to their concerns.

‘It is an honour to have the trust of the people placed in me and I will not let them down with the excuse “I’m too busy” – if they ever hear that, then I will have failed them, and I’m not planning that!’

Councillor Nearney also said that he was ‘exceptionally proud of the local Labour party’ for the gains they had made in last Thursday’s elections, thanking their members and families for the support they had given him since campaigning began in November.

Labour won a landslide 94 out of the 126 seats available on Durham County Council in last Thursday’s local elections, increasing their majority to a comfortable 62.

Dale Bihari, the Co-Chair of the Durham University Labour Club (DULC), said he was amazed by the results. ‘We’ve taken places like Sherburn and Belmont and wiped out the Lib Dem councillors there,’ he said. ‘We’ve also made gains in Deerness and various other places.’

‘I expect the Lib Dems will attempt to talk up their performance by emphasising their hold on places like Elvet and Gilesgate but their majority was dramatically reduced and we have high hopes for the future.’

It was a bad night for the Conservatives and the Liberal Democrats as they lost seven and sixteen councillors respectively. It was also a disappointing night for the Green Party who failed to secure any seats.

But the Liberal Democrats held on in the student areas of Durham City, winning in Elvet and Gilesgate, Neville’s Cross and picking up Durham South from Labour.

Nigel Martin, a former Principal of Trevelyan College, and Grenville Holland, a former President of the Durham University Cricket Club, were re-elected in Neville’s Cross promising to prioritise green issues and housing when representing students in County Hall.

Mr Martin said: “We have been lobbying hard to introduce mandatory Houses in Multiple Occupation(HMO) licensing for all properties.

“We also want to see a mandatory code of standards for landlords in Durham City. To date there have only been voluntary ones via the DSU Accommodation Office and they don’t really have enough traction with the body of landlords.”

David Freeman and Richard Ormerod were elected for the Lib Dems in Elvet and Gilesgate whilst David Stoker won a tight four-way marginal in Durham South.

Joe Donnelly, the President of the Durham University Liberal Democracts, said he was pleased with the results in Durham City. He said: “We won the student vote in the Hill Colleges but it was close. We got around 30% whilst the Tories, Greens and Labour were around 20-26%.

“We also won the polling station in the Elvet and Gilesgate ward that covers the Bailey students but there was very low student turnout. Across the county it was a difficult night once you left Durham City but that was always going to happen in former mining areas once we went into coalition.

“But in the Durham City constituency Labour didn’t make the inroads they needed to stop this being a Labour/Lib Dem marginal seat.”

Nine students from the Durham University Conservative Association (DUCA) were standing as candidates in the election and they won 1,477 votes overall. Their best performance came in Durham South where DUCA’s Political Officer, Jonathan Duell, achieved 3rd place with 15% of the vote.

Mr Duell said: “In challenging political times the DUCA team has been delighted by the enthusiastic contributions to many hard-fought campaigns by a large number of our dedicated members.

“The positive responses we received from students and local residents alike emphasised the benefits of engaging with real political issues on the doorsteps of County Durham.

“Smart spending and fresh thinking are the key to rebuilding trust in local politics, and we’ll continue to fight for common sense representation all year round.”