Play was abandoned due to rain on Day 5 in the Pepsi ICC WCL Division 6 tournament with all matches finishing as a ‘No Result’.

The last round of league matches will now be replayed on Sunday at the same venues and the final league table will be used determine the tournament rankings.

The heavy rain of the mid-afternoon, which prevented all of the matches from completing the 20 overs necessary in the 2nd innings for a result, came at just the wrong time for Jersey, who appeared to be on their way to a comfortable win over Vanuatu and certain promotion to WCL Division 5.

The Islanders, fielding first for the 5th time at this tournament, had bowled Vanuatu out for 135 in 44.3 overs and were 27-0 in their run chase before going into the lunch interval. But they never made it back out onto the field as the heavens opened.

Vanuatu’s opening batsmen Trevor Langa (19) and Damian Smith (22) had earlier showed some mettle by putting on a solid 52 for the first wicket, seeing off the threat of new-ball pair Paul Connolly and Cornelis Bodenstein and seemingly building a good foundation for the innings.

But Tom Minty’s introduction into the attack swung the momentum in Jersey’s favour, the seamer dismissing both openers in consecutive balls, first Langa well-caught by Andrew Dewhurst at extra cover and then Smith leg before wicket.

Vanuatu’s captain and the leading run-scorer in the tournament Andrew Mansale safely saw off the hat-trick ball but Minty struck again in the 24th over, this time clean bowling Jelany Chilia for 5.

At 76-3, Jersey then put a squeeze on whilst Mansale and 17-year old Nalin Nipiko looked to rebuild the Vanuatu innings, although the pair struggled to keep the score ticking over. Both were eventually undone by the left-arm spin of in-form all-rounder Ben Stevens, reducing Vanuatu to 93-5 and instigating a batting collapse.

Patrick Matautaava (27 off 30 balls) flashed the bat to pick up some valuable late boundaries off Bodenstein but wickets tumbled around him and he was the last man out in the 45th over, Luke Gallichan picking up his first wicket as Matautaava launched a short ball straight into the grateful hands of Bisson at deep mid-wicket. 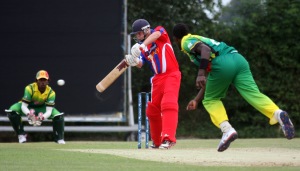 Jersey openers Gough (11*) and Bisson (16*), once again facing a testing little spell before the lunch interval, survived unscathed, both batting positively and finding the boundary with a selection of assured cuts and elegant on-drives, but that was to be the last of Jersey’s batting as the rain came down during the break.

Gough said, ‘This has happened to us several times before at tournaments. You get as close as you can to a result and then it gets washed out. It’s frustrating, but that’s life.

‘Vanuatu batted well at the start today but then we came back – Tommy Minty and Benny Stevens brought it back brilliantly and I was really pleased with our fielding performance so hopefully we can come back and do the same thing tomorrow.

‘We expect a different day and different conditions but we’re positive after the quality we’ve shown today.’

Mansale said, ‘It’s going to be a big opportunity for the boys to bounce back tomorrow. We didn’t perform the way we expected today so it’s good to be given another chance.

‘Having bowled at their opening batsmen we’ve worked out some new plans and we’ll look to use some different tactics from today. We’re happy to have faced their bowlers in these conditions so our batters will be better prepared for tomorrow.’

Nigeria was also left regretting the arrival of the rain as they looked poised to beat Argentina at Grainville.

The Nigerians dismissed Argentina for 144 in 46.3 overs, captain Kunle Adegbola picking up 3-24 in his 10 overs and Osita Onwuzilike taking his first wickets of the tournament in returning 3-23 from his 10. Gary Savage top-scored for Argentina with 40 from 97 balls, including four boundaries.

In reply, Nigeria reached 26-1 in 6 overs, seemingly well set for a successful run-chase, but they will have to instead come back and try again tomorrow.

Azmatullah Nazeer was Kuwait’s stand-out performer with the ball, bowling five maidens in a spell of 10 overs that went for 14 runs and included three wickets.

The tournament table remains unchanged following today’s action, meaning that all four of Jersey, Vanuatu, Nigeria and Argentina still harbour hopes of promotion if results go their way on Sunday.