‘My name is Picasso,’ he says, eyes glinting mischievously over a big, bushy, grey moustache. ‘And I sell thousands of paintings a day.’ 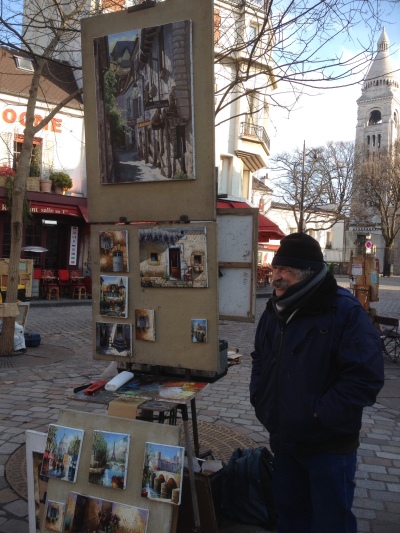 His booming laugh echoes out around La Place du Tertre. Above him, in the historic heart of Montmartre, the white dome of Sacre Coeur glistens in the early morning sun. Pigeons shuffle and flit, pecking between the cobbles. Empty cafes line the perimeter of the square as one or two Parisians cradle their steaming espressos al fresco. Perched high above the city, painters here huddle over their work, braced against the winter cold. Lovingly they tend to their windows onto imagined worlds.

‘Picasso’ is in fact Giorgios Destino, a Greek painter who first came to La Place du Tertre in 1971. He has enormous, rugged hands, testament to his previous life as a handyman and builder. Twice a month he travels here from the south of France to sell his work.

The artists here are struggling amidst France’s economic stagnation. According to Insee, France’s National Institute for Statistics, the economy has grown only 0.6% in six years. Depressed domestic demand has hurt sales. Jean-Pierre Collin, who has been painting in the square since 1968, says his annual income has dropped by 40% compared to ten years ago. ‘I used to have a car but now I can’t afford it,’ he says. 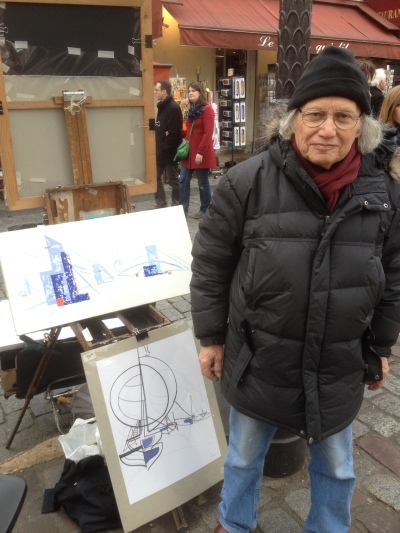 ‘We’re in the crisis,’ Nabil Alhamad, an impressionist artist from Syria, says. ‘I pay €1,200 in rent per month for my house and it’s getting more difficult. I have less to spend. Up until 2008, 2009, it was good. But now it’s difficult. Before, I used to go on holiday for two weeks, or for a month. Places like Italy and Spain. Now I can only afford a few days, and just around Paris.’

Destino puts part of the blame for declining sales on China. ‘Paintings of Parisian scenes made in China are sold in nearby shops for next to nothing,’ he says. ‘Ten, twenty euros. They’ve broken the spirit we have here. But it’s not the fault of the Chinese. It’s us. We haven’t protected ourselves.’

Georges Caramadre, 77, one of the oldest painters in the square, sees the same problem. ‘They’re parasites’, he says.

Fewer tourists is another challenge. Caramadre says American visitors are some of his best clients but he sees less of them. ‘France got a lot of negative press coverage after Charlie Hebdo and that worries me. I’m worried they won’t come back,’ he says.

Insee’s statistics show that the number of tourists coming to Paris declined in the latter months of 2014. Hotel occupancy in November, for example, was down 6.8% compared to 2013.

To survive, these artists have been forced to adapt. Lowering prices is one strategy. ‘Before the crisis I sold this painting at €300,’ Nabil says, pointing to a large, abstract depiction of Notre Dame in shades of auburn. ‘Now I sell it for €170, and I’d negotiate down to €150 if I had to. I’m lowering my prices all the time because I need the money to pay my bills. Everyone’s having to do the same. It’s the times we’re in.’

Thinking more commercially is another survival ploy. Caramadre says he finds himself painting half for profit, half for pleasure. ‘I paint these to eat,’ he says, displaying a row of ornately decorated bookmarks. ‘They’re popular with the tourists.’ He then gestures to a larger tableau of impressionist art. ‘And I paint this for myself. There was a golden age in the past when everyone had their own style. But now we’ve had to change, painting more commercial things.’

Djordje Zdravkovic, a Serb who came to the square in 2006 from Greece, embraces a third strategy: specialization and mass production. His easel boasts numerous tasteful, modern interpretations of the Eiffel Tower, all modestly priced under €30.

‘This place needed more cheap work, like souvenirs,’ he explains. ‘I’ve done it so much that it only takes me a few minutes to paint the Eiffel Tower.’ How much money does he make in a day? ‘It’s a professional secret,’ he says, smiling wryly. ‘But I don’t do so bad.’

Despite this tough economic climate, La Place du Tertre remains prime artistic real estate and competition to paint and sell here is fierce. City hall has strictly regulated the square since 1983: artists require a permit, costing around €300 annually, and the square is divided into 149 plots of 1m2, with artists having the right to paint and sell on alternative days. By law, 78 places are reserved for painters, 59 for portraitists, 7 for caricaturists and 5 for silhouettists. New applicants must submit a dossier of their work which is reviewed by a committee and only a few new licences are granted each year.

A portraitist at work

‘It’s better now,’ Destino says. ‘Before the town hall stepped in, there used to be fights. When the restaurants set up their tables in the middle of the square in the evening, space becomes limited. So people would sleep in their cars overnight to save their place. If someone came and moved your easel, there would be a fight. That’s how it was.’

A bustle of excited British school kids descends upon the square. ’10 minutes, only 10 minutes!’ a caricaturist cries, rehearsed in his best English. Mr Bean’s enormous nose and Angelina Jolie’s voluptuous lips beam back gaudily from his easel. Money changes hands and the painting begins.

Browsing in the square

A sharply dressed young Spanish couple approach Destino’s easel with interest. They stop and ponder. ’Don’t be scared, you’re allowed to buy!’ he says, flashing a wide, creasing smile. They laugh but move on.

He turns back to his easel. Around him, brushes dip in water, dip onto the palette. Colours bleeding together. Minds calculating. This is the double life of these artists. One moment they’re trapped, bound by the harsh economic logic of their reality.  The next they’re Picassos, free, masters of their imagined worlds.